Home > Energy Investing > Renewable Energy > Fossil Fuels Are Out, Renewables Are In

Fossil Fuels Are Out, Renewables Are In

A massive shift is underway.

Money is flooding out of fossil fuels… and into renewable energy.

And it’s happening faster than some analysts realize.

According to some estimates, the big fossil fuel companies are betting demand for their products will continue to rise until the 2040s.

But I think the peak in fossil fuel demand is going to happen in this decade.

That’s 20 years sooner than predicted. And the money is already starting to move. 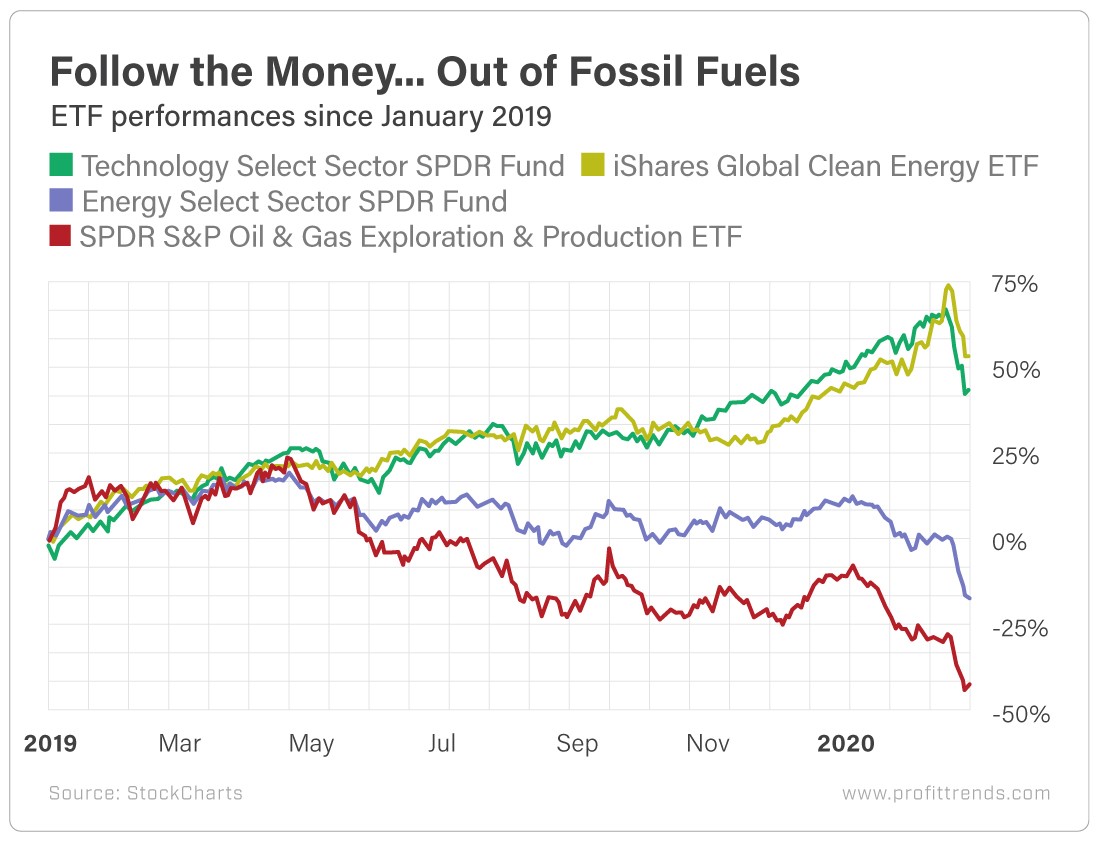 Investors who put money in the Energy Select Sector SPDR Fund (NYSE: XLE) in January 2019 are down more than 15.7%.

Those who bet on exploration and production companies via the SPDR S&P Oil & Gas Exploration & Production ETF (NYSE: XOP) fared much worse. Their holdings are worth 43.6% less now than they were at the beginning of 2019.

Let’s turn our attention to the other two funds above.

Until last week, technology has been the leading investment since the beginning of 2019. The Technology Select Sector SPDR Fund (NYSE: XLK) returned more than 44.4%. Not bad.

In fact, technology was the leading investment over the last decade. The tech fund returned a whopping 379% over that time frame.

But is it going to be the best sector to park your money in for the next 10 years? I don’t think so.

The iShares Global Clean Energy ETF (Nasdaq: ICLN) has stolen the lead. Money is moving into renewable energy, securing the sector’s spot as the top dog of the next decade.

Renewables have taken over (at least by the above measure) as the top-performing investment. They returned more than 54.3% since January 2019. And there’s plenty more runway ahead.

Not just over the next few months or years… but for decades to come.

Costs for wind and solar continue to fall. And costs for energy storage are starting to drop as well.

With battery prices in decline, wind, solar and storage are becoming competitive with any other forms of power generation.

More Americans are embracing renewable energy too. About 74 gigawatts of new capacity (96.6% of all new generating capacity planned for 2020) will come from wind and solar.

Additionally, utilities are finally beginning to see how adding renewables can boost the resiliency of their power grids.

There are a number of other renewable energy funds available besides the one mentioned in the chart above. Just make sure you do your due diligence first.

How to Invest in the Growing Green Hydrogen Sector