Over the last year, more and more Americans became comfortable with online retail.

We had to. The quarantine measures shuttered brick-and-mortar retailers and inside dining.

In turn, e-commerce sales skyrocketed in the U.S. Online retail sales surged 32.4% to a record $791.7 billion in 2020. And according to the U.S. Census Bureau, e-commerce represented 14% of total sales last year.

But this wasn’t merely an American phenomenon.

Around the globe, e-commerce was king in 2020. And this is not a crown that’s likely to be relinquished soon.

A major milestone is about to be hit this year. And only a handful of companies are at the center of this historic moment.

Yes, 2020 was a dumpster fire for a wide variety of reasons.

There were global ecological disasters, economic collapses, soaring unemployment, political unrest and riots. Not to mention, much of this occurred under the umbrella of a devastating global pandemic.

But there were bright spots and milestones.

One of these was e-commerce.

Globally, online retail sales grew 27.6% to $4.28 trillion. And this is just the next wave in a trend that will reshape the global economy for the foreseeable future. 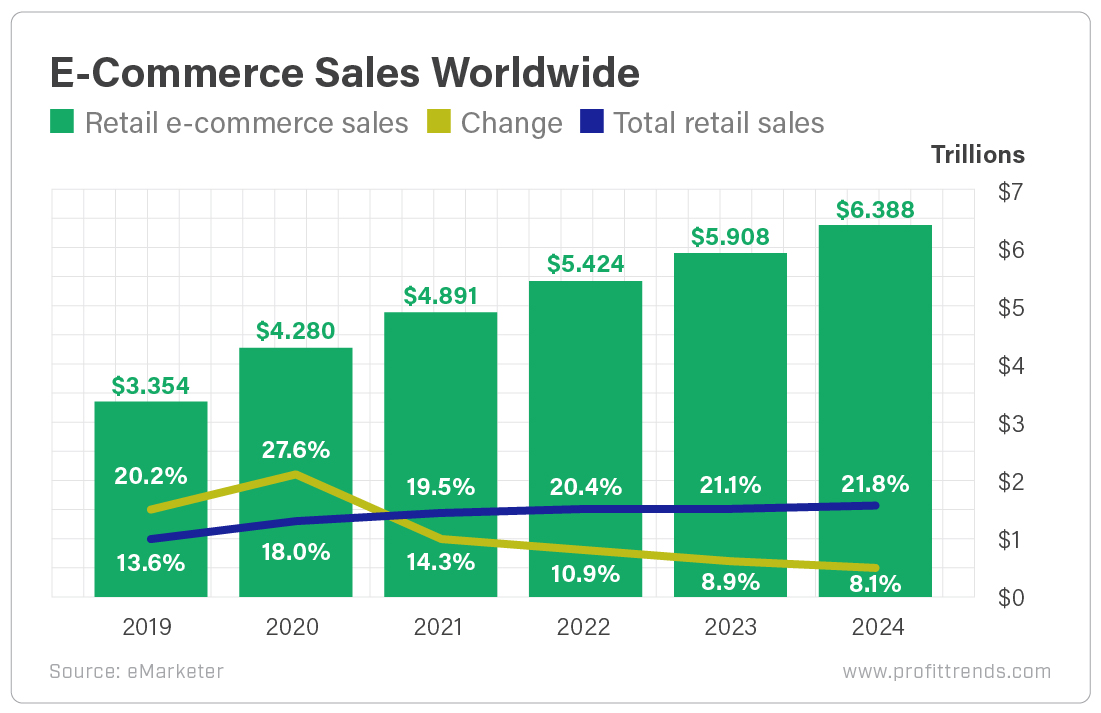 But here’s the deal…

The majority of this market is controlled by only a half-dozen companies.

I know, everyone instantly thinks of Amazon (Nasdaq: AMZN) when they think of global online retailers. But that’s a mistake. Because Amazon – and the U.S. – is far from being No. 1 when it comes to e-commerce.

The true jewel of the online retail landscape is so far ahead of the rest of the world that it could be decades before Americans catch up.

China is home to more than 1.4 billion people.

It’s the most populous country on the planet. And it’s an unmatched engine for growth.

China is the fastest-growing major economy in the world, as well as the second-largest economy behind the U.S. But there’s something else taking place in the Asian powerhouse the rest of the world can’t hope to rival…

In 2021, China is projected to make history. More than half of its retail sales are expected to take place online.

Let that sink in… For the first time ever, the majority of an entire country’s retail sales will come from the internet.

No other economy on the planet comes even close to reaching that figure. 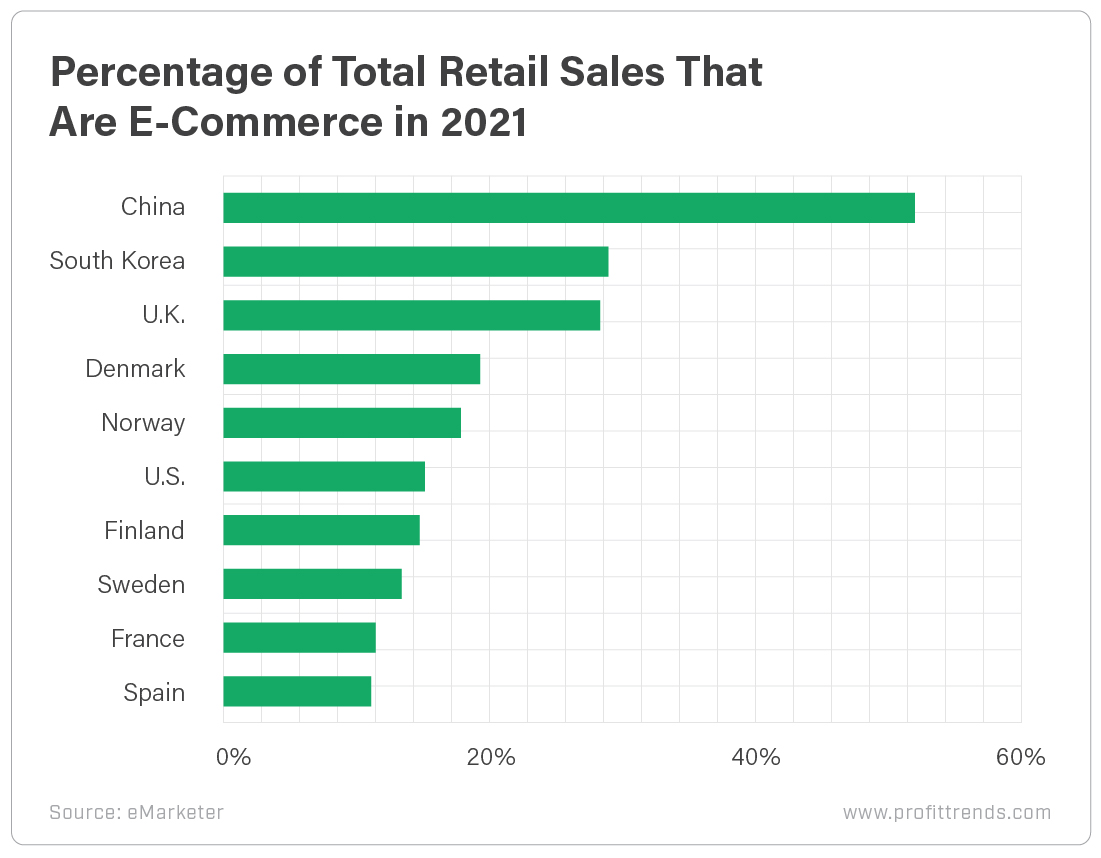 The only countries within striking distance are South Korea and the U.K., where 28% of total sales originate online.

What’s even more fascinating – and exciting for me as an investor – is the pace and size of e-commerce growth in China.

Those figures out of China are extremely important. I laid out above that global online sales were $4.28 trillion in 2020 and will near $6.4 trillion by 2024. That means China accounts for – and will continue to account for – more than half of all e-commerce worldwide.

Now, the majority of global e-commerce is controlled by just six companies. And four of those – including the two largest market share holders – are Chinese. 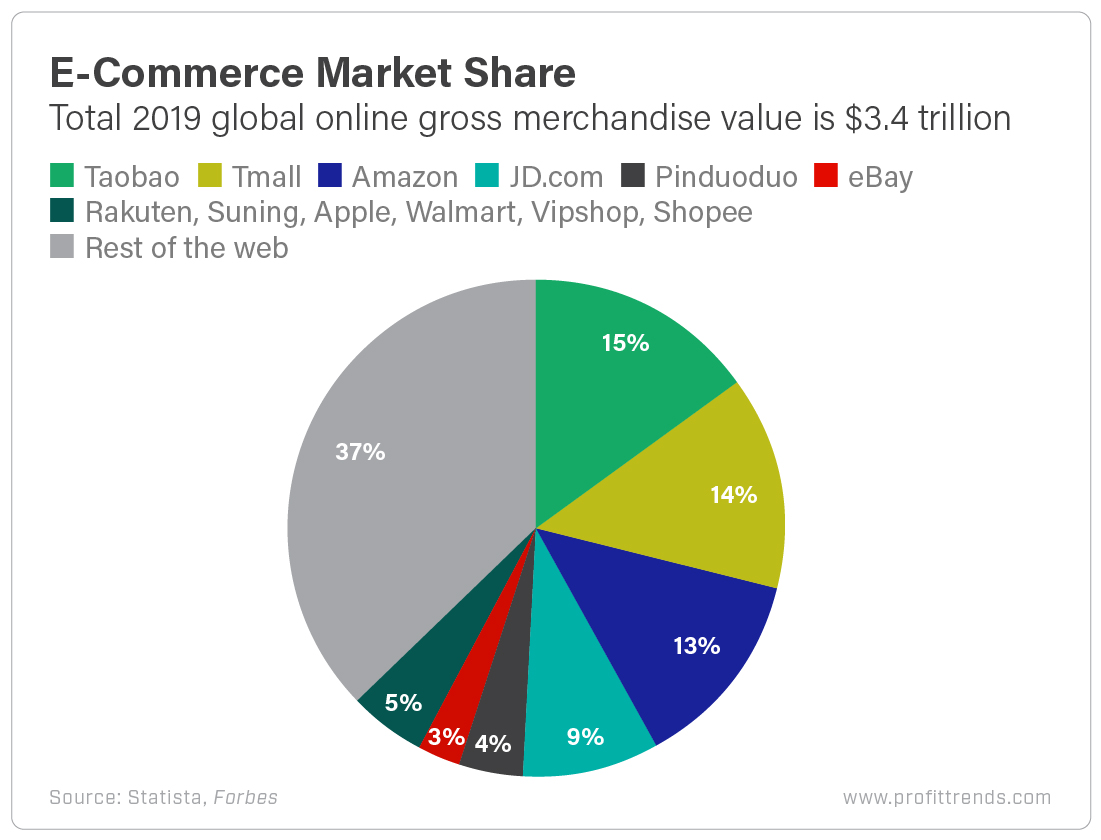 Right behind that is China’s Tmall – also owned by Alibaba.

Then there is Amazon, followed by China’s JD.com (Nasdaq: JD) and Pinduoduo (Nasdaq: PDD). And finally, there’s eBay (Nasdaq: EBAY).

But the big takeaway here is that China is the most dominant force in e-commerce. And Asia as a whole is the globe’s booming region for online sales.

The consumer market there is unlike anything else in the world.

And as China’s economy surpasses an unmatched milestone this year – more than half of all sales coming from the internet – these plays are in a position to reward investors for years to come.

The Buy Signal Every Investor Needs to Act On

Are Options a Safe Investment?

Is May the Market’s Most Misunderstood Month?