Why This December Could Be the Best Month for Investors

“The trend is your friend” is a timeless piece of fortune-cookie wisdom on Wall Street.

It’s been parroted for so long that its origins are lost to the mists of time.

But it’s the No. 1 rule of investing.

And it’s one we devoutly adhere to here because trends are our best friends – whether they’re emerging or repeating.

For more than a decade, I’ve shared my expertise on market seasonality with investors with a great deal of success.

And today, we’re going to dive into arguably the most important month of the year for the markets: December.

The winter holidays are what most investors focus on at this time of the year.

Because of that, December can be a tricky month for the markets.

I tend to think of its mood as delicate.

With holiday spending being such an important catalyst – a make-or-break moment for many retailers – there will inevitably be headlines that say, “The Grinch Stole Christmas.”

And I’ll wager that inflation and supply chain issues will be in regular rotation with the Grinch du jour.

So we may see some softness in retailers in those last hours before the big day – December 25. Though, we’ll often see a relief rally afterward because the final tally for sales is usually nowhere near as bad as expected.

Since 1996, the Dow Jones Industrial Average has ended December with a monthly loss only nine times. 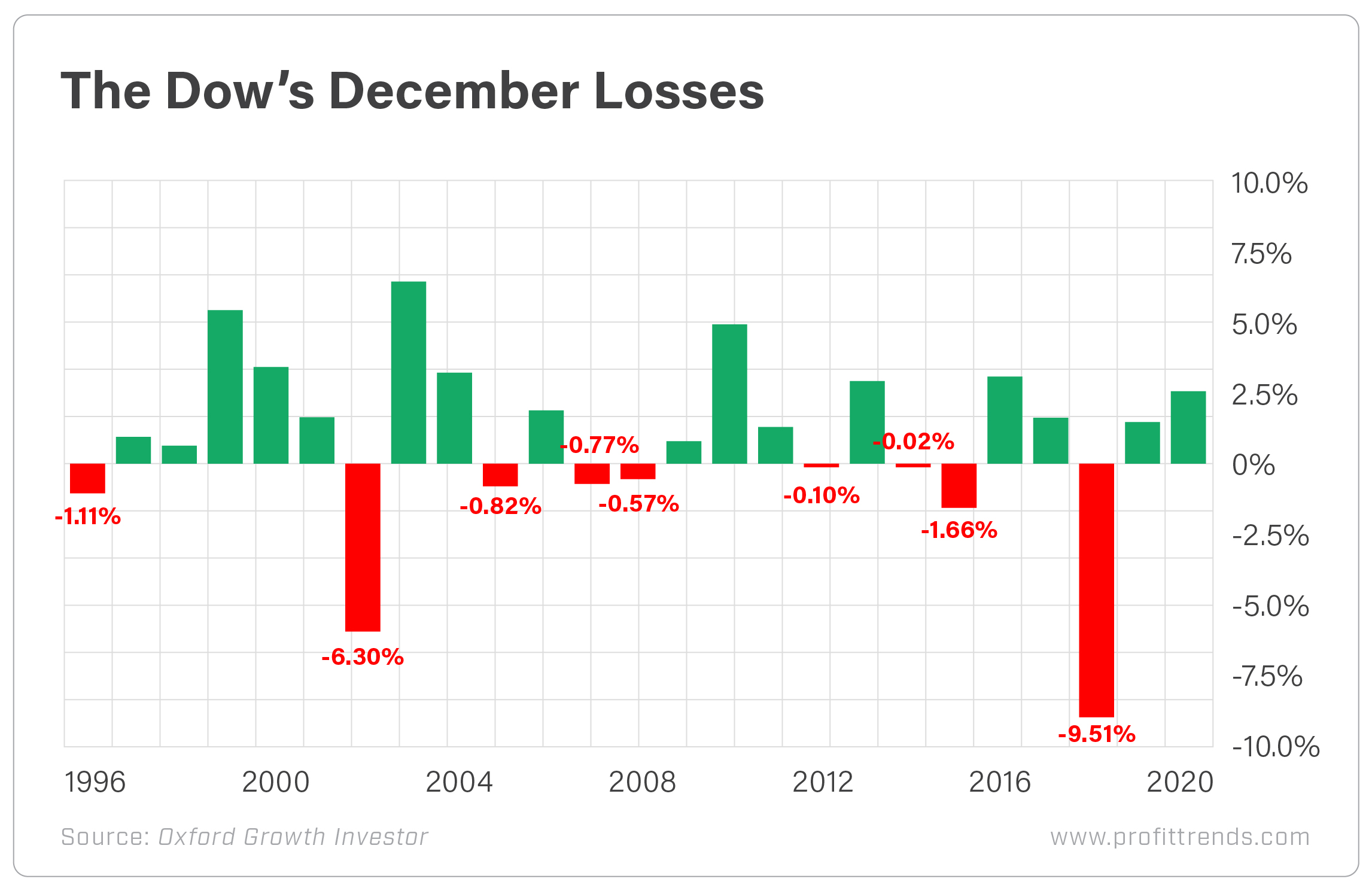 But the other aspect of the story here is that massive monthly losses are fairly rare. The majority of the declines the Dow has notched in the month of December have been less than 1%.

And the only real nightmares before Christmas were a 6.3% drop in 2002 and the notoriously bad 9.5% decline in 2018, which included the worst Christmas Eve session on record.

When all is said and done, the Dow has averaged a 0.95% gain in December over the past quarter-century. That puts it in the top end of the historically best-performing months, and it caps what’s traditionally been a very strong quarter for stocks.

For the past couple of months, I’ve been pounding the table to ignore the talking heads and follow the trends.

As I said above, the trend is your friend.

And we’re in a profitable three-month stretch for the markets.

It’s the annual winter rally, when investors are buoyed by holiday cheer and optimism about the future abounds.

This rally begins in October and pushes through the end of the year. And since the start of October, the Dow is up nearly 3%, the Nasdaq Composite is up 7.2% and the S&P 500 Index is up 8.5%. 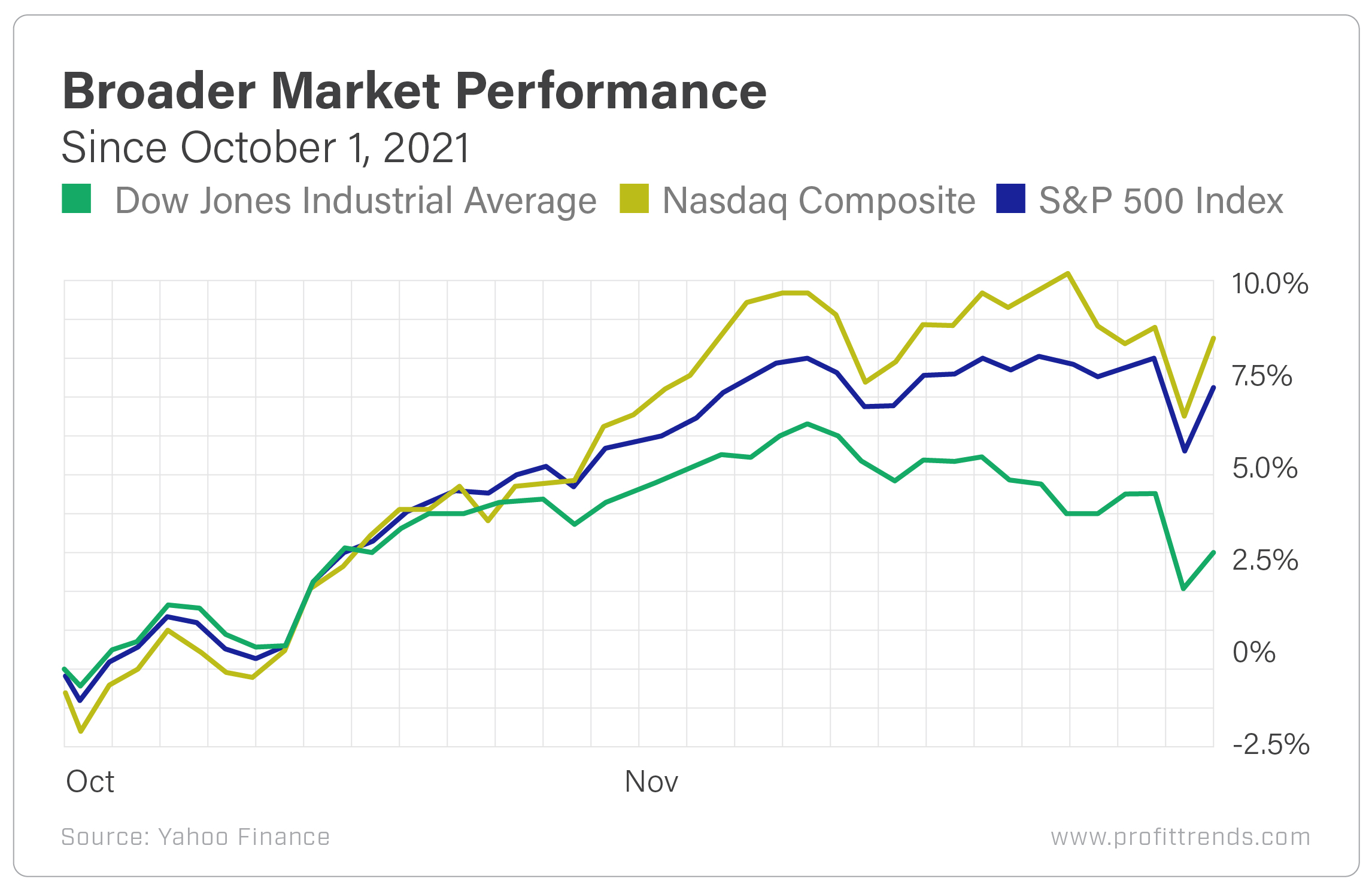 That’s even after Black Friday’s freak-out over the spread of the omicron variant.

The Dow surged more than 5.5% in October and hit all-time highs this month before flattening and eventually flash crashing on new COVID-19 concerns.

Now, it’s important to keep in mind that volatility isn’t so unusual around this time of the year. You see, the markets are typically flying higher on candy cane-flavored hopes, but uncertainty is the Scrooge of gains.

We saw this in 2018 when the markets collapsed as the trade war between the U.S. and China reached a boiling point. It was the worst December since 1931. And it was a bitter end to the worst year for the markets since 2008.

Any concerns over the supply chain – like we potentially have this year – can trigger a cascading effect.

Though, as we’ve seen for a quarter-century, the Dow and the other major U.S. indexes more often than not keep their heads above water during December.

And historically, these final weeks (albeit emotionally delicate at times) have been some of the best for investors.

There will be a lot of talk about inflation, the supply chain and even a potential government shutdown. These will trigger short-term volatility. But as we’ve seen time and again, the markets finish December with a flourish.

That means there’s still plenty of fuel left in the tank for even more holiday cheer – regardless of the latest COVID-19 variant. And there are likely even new all-time highs ahead!

P.S. With new all-time highs in store, click here to learn how you can profit from the best month for the markets.

Is This the Buy Signal Investors Have Been Waiting For?

Breaking Down One of Wall Street’s Biggest Lies