Why October Is a Sweet Month for Stocks

In August, we warned investors to be prepared for the annual September meltdown…

And that’s exactly what we got!

The Dow Jones Industrial Average dropped nearly 4.4% during the month as the S&P 500 Index posted its worst monthly return since March 2020.

Then, tech stocks on the Nasdaq Composite took a pummeling as bond yields surged.

But that’s precisely the kind of swoon we told investors to prepare for. And it’s why we recommended buying some inverse exchange-traded funds (ETFs) to soften the blow.

Now the question from clammy-palmed investors is this: What’s next?

Are there more storm clouds or some sunny autumn days on the horizon?

One of our investing pillars here is “trends.”

I know… It’s broad and vague. It’s everything and nothing all at once.

But beyond nascent industries – such as cannabis and cryptocurrencies – and world-changing innovations, like electric vehicles and the commercial space industry, we focus on cyclical and seasonal trends.

This has been my bread and butter for decades.

And I love nothing more than sharing these trends with investors – whether I’m prophesizing doom or preaching glorious returns.

Because our goal is to help readers navigate the month ahead. And if investors know what to expect, they can prepare their mindsets – and portfolios – accordingly.

October is home to one of my favorite holidays: Halloween.

But October often stands out in investors’ minds as a particularly dangerous month.

And let’s be clear, that’s not without reason.

Half a dozen of the worst declines in market history have unfolded in the bewitching month.

Investors have suffered through two Black Mondays in October – one in 1929 and the other in 1987. Not to mention the fright of Black Tuesday and Black Thursday in past Octobers.

We also have the infamous October of 2008, when the S&P 500 lost 17% as the global financial system collapsed.

With all these nightmarish memories, it’s understandable that investors walk gingerly into the month – especially since they probably just survived the horror show that often is September.

But in reality, October gets more of a bad rap than it deserves.

A Great Month With Bad Press

Since 1994, the Dow has ended October down nine times. 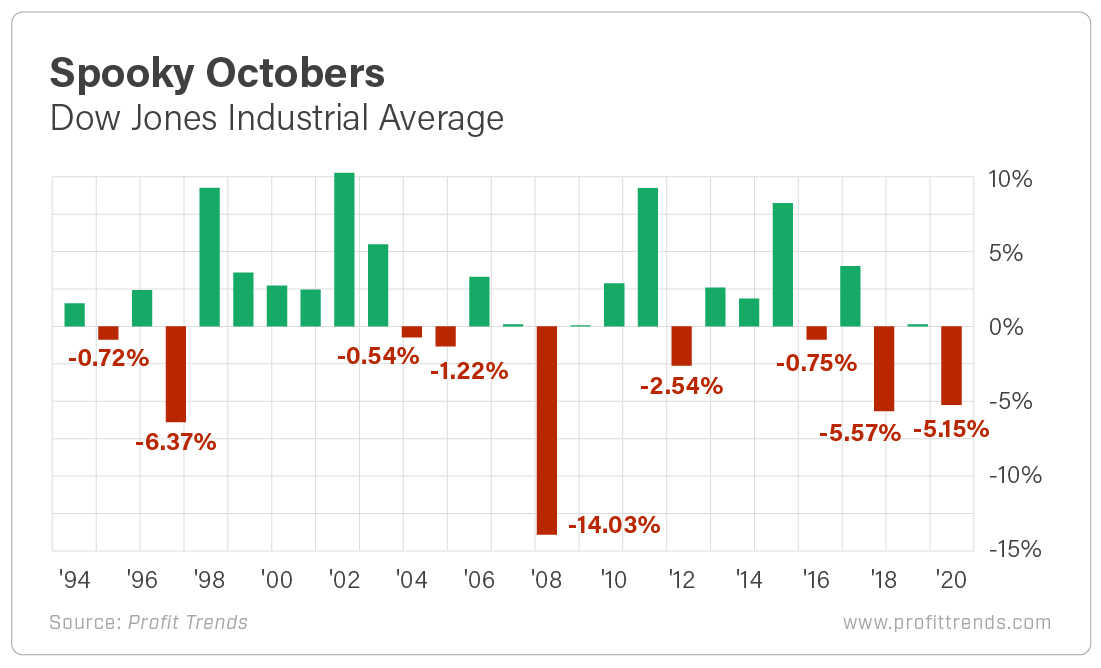 That may sound bad, but it’s really not. And there’s an important asterisk here.

First, over the past 25 years, data shows that the Dow ends October up 64% of the time.

For comparison, the Dow has ended June and September lower 14 times since 1994. That means the market rises in those months less than half the time.

Those are far more frightful months for investors, but they don’t get anywhere near as much bad press.

Now, looking at the above chart, we can see the scariest October for the Dow was in 2008 with a drop of 14%.

The second-worst month was back in 1997. But we’ve had two drops of more than 5% in the past three years. And that October performance chart looks really spooky after 2000.

But don’t rush to blame Y2K.

Here’s where the asterisk for October returns comes in…

As I’ve outlined in the past, Octobers in presidential election years are particularly dangerous. They’re so bad that my advice for protecting your portfolio during these is a near-automatic recommendation to buy puts or inverse ETFs. The data here is pretty definitive, with drops in 1992, 2004, 2008, 2012, 2016 and 2020.

That’s almost every election year in the past three decades!

There’s often a lot of anxiety before that pivotal day in November. And that uncertainty – as the political divide has widened – has only increased during the past five elections.

So if this were an election year, I’d tell investors to be afraid.

But the trend in October is actually different from what investors tend to think.

Traditionally, October is the start of a sweet three-month period for the Dow – October, November and December.

And this rally is fueled by holiday cheer and consumer spending.

During the past 25 years, the Dow has averaged a 1.36% gain in October. It wins the bronze for the best monthly performance over that span.

The only months with better performances are November and April. 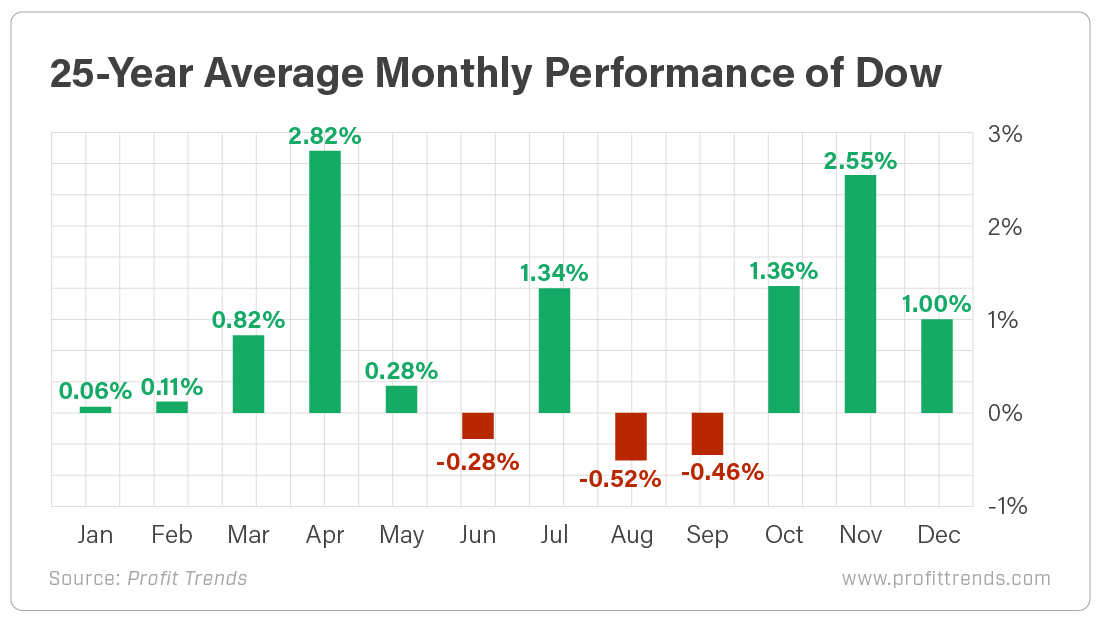 But the Dow averages an at least 1% gain in each of the last three months of the year. And this momentum often carries all the way into May. (Though, I do have some choice words about January when we get a little closer.)

In turn, we’re rewarded with the best three-month stretch of the year.

Data doesn’t show that October is worse than any other fretted-over month. In fact, it shows just the opposite (unless Americans are heading to the voting booths).

So don’t get spooked by September’s scare. Instead, prepare for a rally from here on out.

Facebook Keeps Its Crown Despite Month in the Red

The Best Investing Strategy to Use in a Down Market

Will the Rumored Government Shutdown Sink Your Retirement?