Legal cannabis is arguably the biggest business story of the last decade.

Now, it’s not without its risks… particularly in the U.S.

Pot is still illegal at the federal level. Though its prohibition appears to be coming to an end, with 33 states legalizing medical marijuana and 11 states allowing for recreational or adult-use marijuana.

But for some, the change isn’t happening fast enough.

And investors have been spooked multiple times in recent years about the glacially slow pace of change at the federal level in the U.S., particularly with the lack of approvals of marijuana mergers and acquisitions from the Department of Justice.

Then there are consumer issues like the vaping crisis, triggered from illicit players.

So if you’re anxious about investing in pot stocks, you’re not alone.

The volatility – the steep drops and sharp rebounds – are a roller coaster not every investor wants to ride.

But here’s the thing…

The American marijuana market is expected to be worth $80 billion by 2030.

The booming CBD industry is expected to be worth more than $20 billion by 2021.

In all, the legal global pot market is poised to surge past $500 billion over the next decade.

And there are massive profits to be made.

Now, for investors who want to snag a piece of this updraft to pad their retirement portfolios but don’t want to be saddled with the anxiety-inducing volatility, they needn’t worry.

Cannabis is a new industry being born.

And there are ancillary players helping to get products from the grow house to the dispensary and to the consumer.

As Mark Twain once said, “During the gold rush, it’s a good time to be in the pick-and-shovel business.”

All of them benefit from cannabis. That means they have access to that explosive growth. But none are involved in actually selling marijuana, giving them a little more stability.

Essentially, this is your non-pot pot portfolio.

Hydroponics is vital to the cannabis industry.

Growers have tight control over their crop. And highly specialized strains are essential to the modern marijuana market.

Colorado’s GrowGeneration (OTC: GRWG) is the largest hydroponics firm in the U.S. And it’s a perfect example of an ancillary business booming from legal pot’s growth.

GrowGeneration didn’t set out to be focused on cannabis. But the industry uses more hydroponics than almost any other.

As you can imagine, the largest hydroponics supply chain in America is enjoying some high times because of legal weed…

GrowGeneration is leveraging its success to gobble up smaller competitors.

In fact, this is what’s helped turn it into the largest hydroponics company in America.

And its hydroponics business makes it one of the best growth stocks related to the cannabis industry.

Pot is a popular product.

And with cannabis companies unable to have access to the banking and financial services so many other industries enjoy, legal weed finds itself facing an unwanted dilemma: tons and tons of cash.

But these problems are a boon for security providers.

Now, private security is already projected to be a huge industry. I’m talking as much as $290.7 billion worldwide by 2025.

So even without cannabis, this is a booming industry.

Of course, where cannabis and private security intersect offers even more upside. And that brings us to 3 Sixty Risk Solutions (OTC: SAYFF).

3 Sixty is unique in that it’s the only security company focused primarily on serving the cannabis industry. The Ontario-based firm provides security consulting, on-site security, armored transport of cannabis or cash, secure storage, and even retail security.

The company has already snagged contracts with the industry’s prominent players. Tilray, Canopy Growth Corp. and Aphria are all customers.

Providing security for an entire industry is lucrative, to say the least. 3 Sixty has watched quarterly revenue climb more than 2,600%.

But the company isn’t standing around. It’s expanding its facilities, and fast. It currently offers more than 100,000 square feet of storage space. It has also a fleet of 150-plus vehicles. And 3 Sixty’s staff tops more than 600 personnel.

Even though it’s focused on cannabis, that doesn’t represent its only clients. It also provides executive protection services to high-value and high-profile individuals.

3 Sixty offers a fantastic investment in two of the fastest-growing and most dynamic industries in the modern economy. And it’s ensuring that pot products and money don’t fall into illicit hands.

Marijuana legalization is spreading – not just across the U.S. but also across the globe.

That creates a lot of opportunities up and down the supply chain, as well as on the creative side.

And there’s one company involved in legal cannabis more than any other: KushCo Holdings (OTC: KSHB).

KushCo has a diverse footprint across a variety of product segments. It provides packaging, labeling, papers, marketing, solvents, hydrocarbons and vaporizer technology.

It’s active in every legal jurisdiction in North America and distributes in more than 20 countries.

This allows it to respond to changes not just here in the U.S. but also around the globe.

Since 2010, KushCo has sold more than 1 billion units and provided services to more than 6,000 medical and adult-use growers across Europe, North America and South America.

For KushCo, this is an extremely profitable business model.

After all, the packaging is the first thing your customers interact with, so getting it right is critical.

KushCo is minting a cannabis fortune without growing a single plant. And investors have the opportunity to do the same.

But getting pot to market takes time.

And one of the vital but most time-consuming elements in production is drying.

It takes about a week and requires a lot of space. This is why many firms struggle to keep up with demand.

Even worse, making a mistake can ruin an entire harvest.

But Vancouver-based EnWave (OTC: NWVCF) has a solution.

Its rapid drying technology is revolutionary not just for cannabis but also for the food and pharmaceutical industries.

What makes EnWave’s technology so special is that it’s a low-temperature, low-pressure drying machine.

It ensures that the cannabis retains its cannabinoids and terpenes. These are what give cannabis its medicinal properties. Unfortunately, outdated methods of drying damage these vital compounds.

But EnWave’s technology has an added bonus.

Its dehydration machines do the job much faster. In fact, it only takes one of them 40 minutes to dry cannabis.

The whole process allows for a consistent product getting into the hands of consumers much quicker.

But EnWave is winning contracts in other industries as well. Pharmaceutical giant Merck is a customer, so is NutraDried food company.

EnWave is the only game in town for superfast dehydration without sacrificing quality. And it’s sitting on a patent moat. Though the company is essentially a startup, its technology is already translating into big profits.

EnWave is a rising star. Food and pharmaceuticals are both enormous industries that are turning to its technology. And it’s riding high on the growth of cannabis.

Eyes in the Sky

This is where the Internet of Things, artificial intelligence, automation, robots, driverless vehicles and drones are making farms around the world more efficient and productive.

And one of the cheapest and most effective new pieces of tech for farmers of all types is drones.

The drone market is projected to be worth $43 billion by 2024. A lot of that is thanks to agricultural and industrial adoption.

SenseFly, a Parrot Group (OTC: PAOTF) subsidiary, is one of the premier industrial drone firms. And senseFly’s agricultural drones are becoming commonplace in agriculture.

They’re already being used across the Americas and Europe.

Cannabis and hemp growers work on their strains like vintners work on their grapes. They selectively breed the best-quality crop. And we’re likely to see them adopt technology the rest of agriculture is already leaning on.

Parrot Group’s been around for about 10 years. In that time, it’s consolidated a large portion of the drone market under its umbrella. It’s poised to profit from the ongoing disruption in agriculture and will likely find a spot to roost in cannabis as well.

These five companies are the best ways to snag of piece of pot’s explosive growth… without investing in pot stocks themselves.

They’re the ultimate hedge against the worrisome volatility of a lot of cannabis stocks.

So buy in and become a cannabis-adjacent aristocrat with your non-pot pot stocks.

CNN calls 5G “the lifeblood of the new economy.”

If you don’t invest now, you’ll regret it later.

Click here for details on the top 5G stock… 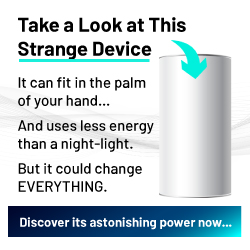