How to Book Gains Amid the Coronavirus Outbreak

Mr. Market is worried sick… Is this more than just the sniffles?

The Wuhan coronavirus is the latest outbreak weighing on investors’ minds.

But in today’s Making the Grade, we’re looking at a possible contrarian way to book some gains amid the global health crisis.

So far, 81 people have lost their lives and more than 2,800 cases of the coronavirus have been reported in China.

Despite the country’s best efforts to keep it contained, the deadly virus has spread to nearly a dozen countries. And over the weekend, a fifth reported case was confirmed in the U.S.

This caused a lot of concern on Wall Street, and the Dow Jones Industrial Average opened down 500 points on Monday.

In turn, it’s sent shares of companies looking to contain or treat the disease skyrocketing.

The questions most investors are now pondering are, should they inject shares of these companies into their portfolio? Or are they chasing a cure that’ll eventually make their portfolios sick?

During times of chaos, we should be looking for diamonds trading at a discount. Not getting squeamish about the blood in the streets.

So before you leap onto the “end of the world” bandwagon, let’s look at the facts.

And at this point, the Centers for Disease Control and Prevention estimates 8,200 to 20,000 Americans have died from the virus in the same period. Somewhere between 12,000 and 61,000 people die every year in the U.S. from the flu.

Those are scary numbers when we stop to think about them… but they’re not moving the market.

This is a trend we’ve seen before. Even though there’s some trepidation over the coronavirus now, outbreaks like this are historically just a blip on Wall Street’s radar.

Since 1981, there have been more than a dozen major outbreaks, including Dengue fever, Ebola, HIV/AIDS, pneumonic plague, SARS, swine flu and Zika.

These all triggered headlines that sent the Chicken Littles running for cover. But look at how the MSCI World Index performed during each of those outbreaks… 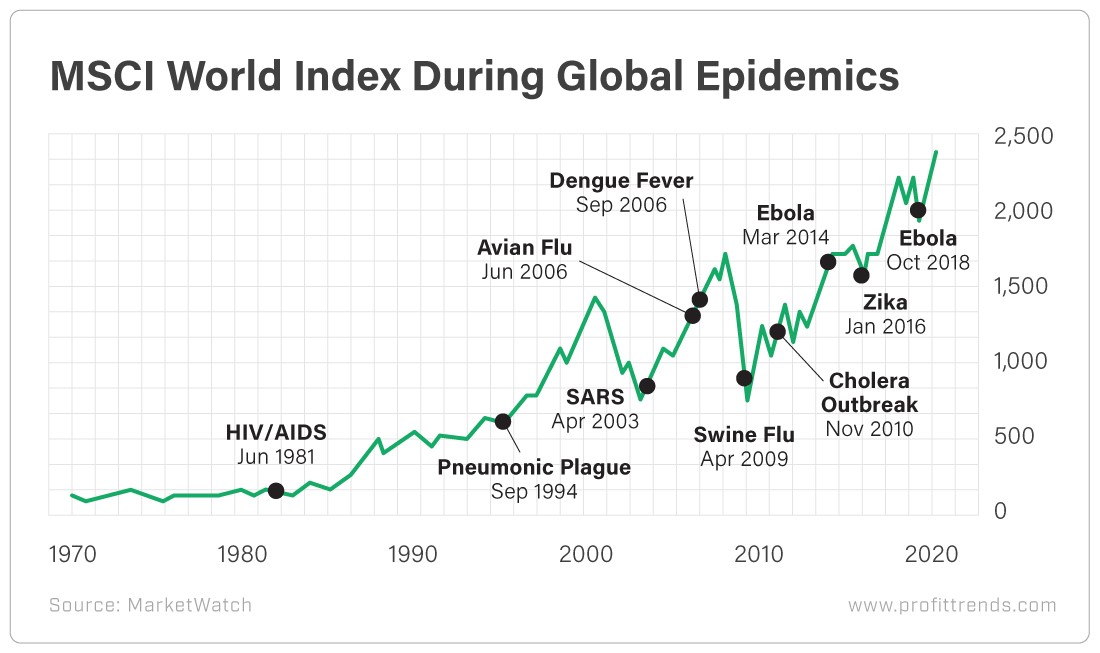 For the most part, markets decline in the first month of the outbreak.

Then they take a breath, recover and move on.

This is exactly what we can expect to see short term in the aftermath of today’s outbreak.

That’s why in today’s Making the Grade, I’m sharing a dozen stocks that may be seeing false gains in the wake of this crisis.

The gains the Dow once touted for the year are gone. The Nasdaq and S&P 500 slid steeply lower as well.

But it’s been a hot time for coronavirus contagion stocks!

Some of these haven’t merely shot up double digits in 2020. They’ve already doubled or tripled or quadrupled! 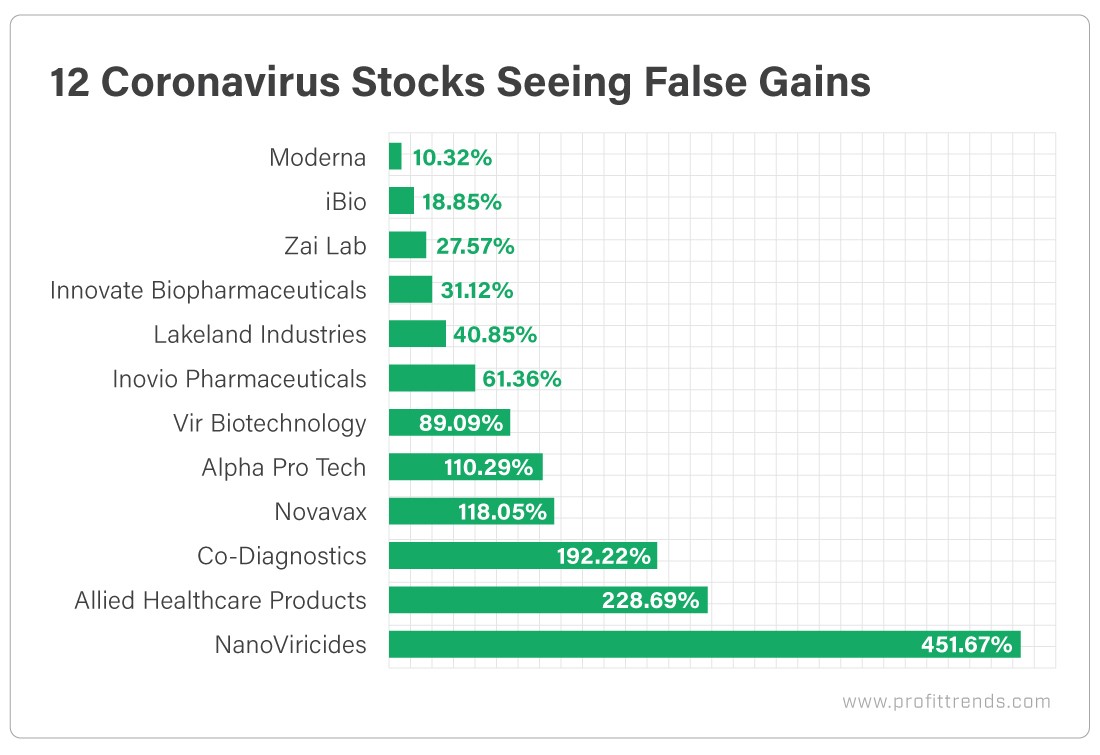 Alpha Pro and Lakeland sell hazmat suits and equipment. Allied Healthcare makes respiratory products. So if you didn’t know, these are the stocks to jump into when the next outbreak begins.

Lakeland shares are up more than 40% year to date, while Allied Healthcare’s and Alpha Pro’s have more than doubled.

Now, if we look back at previous outbreaks, we see similar moves from these three.

For instance, from the end of September to mid-October in 2014, shares of Allied Healthcare Products, Alpha Pro and Lakeland soared as Ebola spread… 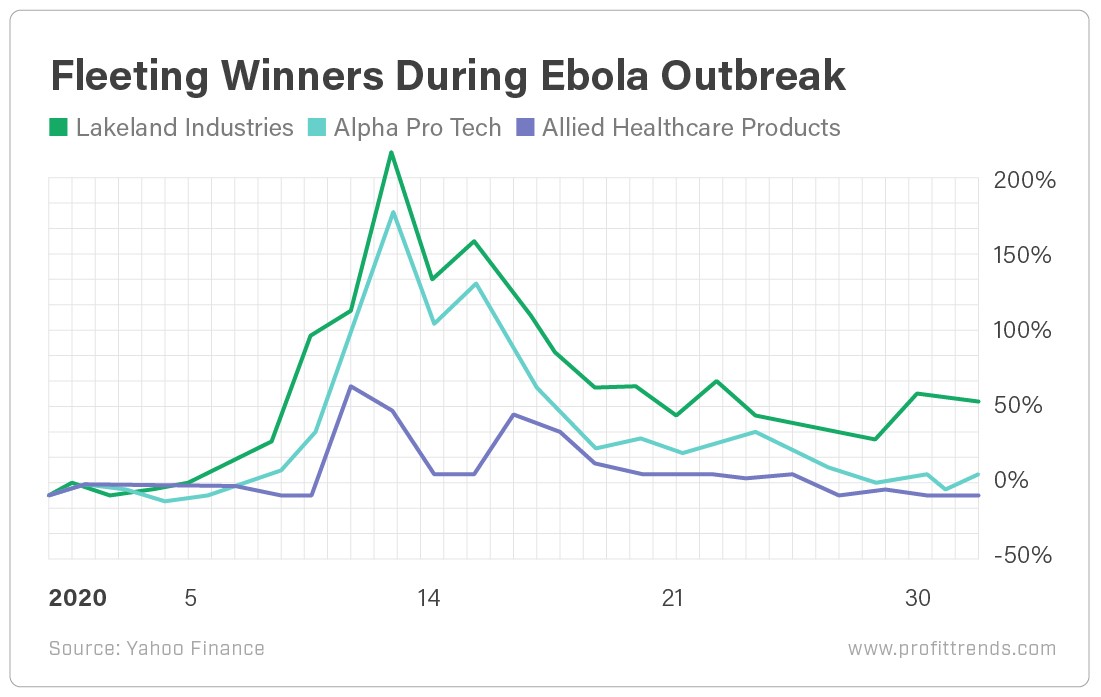 But those panic-induced peaks were short-lived.

Now all three are once again trading at their highest levels in more than a year. And then there’s the supreme highflier: NanoViricides (NYSE: NNVC).

Shares have shot up more than 450% since the coronavirus outbreak began. The company manufactures medicines to fight avian and swine flu. And it has early-stage offerings for Dengue fever and Ebola.

Shares hit $17.77 on Monday, and the average daily trading volume has exploded from less than 1 million to more than 24 million.

These stocks are perfect examples of investor herd mentalilty.

Fears of the Wuhan coronavirus have triggered a global sell-off. And outbreaks like this historically trigger big jumps in a handful of biotechs and medical suppliers.

But these gains are often short-lived. So be extremely careful chasing any of these stocks.

It’s time to start either buying puts or looking for quality underperformers.

Because history has demonstrated time and time again that the panic selling and the biotech euphoria won’t last. Two months from now, the Wuhan coronavirus will be a blip in the rearview mirror.

Holiday Spending Is About to Begin